Dream Mountain is a film executive produced by photographer Cira Crowell, the Founding Director of InLightWorks Productions. Cira’s passion for photography lead to her traveling internationally photographing some of the world’s most engaging natural and urban landscapes, including summiting mountains and hiking over 1,000 miles in the Himalayas. During this time she created an extraordinary body of documentary, humanitarian, landscape and expedition photographs. As a direct outgrowth of mountain-frienships and awareness-raising projects, Cira took on the challenge of executive producing her first film. The shift to executive producing a film project, at extreme elevation, on the other side of the world, managing the expedition, crew, climbing team, post-production and the festival run has been as challenging and satisfying as climbing. 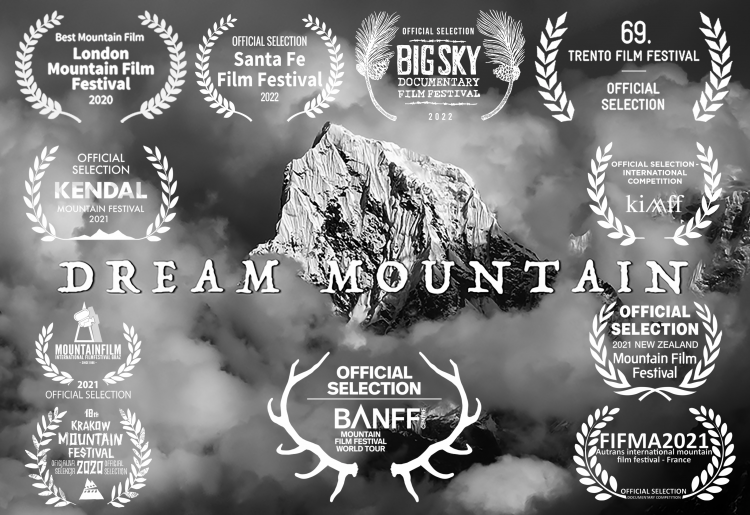 Dream Mountain follows world-class mountaineer Pasang Lhamu Sherpa Akita, on a climb at a pivotal crux of her life and career. Since childhood, Pasang wanted to be a mountaineer but was told it was a man’s job and she should stay home. Transcending family and cultural challenges, she learned to climb. When she realized there were not any female climbing instructors, she became one. At that time, there were no professional female mountain guides in her country, so she broke the gender barrier to become the first. She has summited Everest, K2, Lhotse, Annapurna, Dhaulagiri, and Denali. By questioning limitations, Pasang reached the elite echelons of her profession and in 2016 was named the National Geographic Adventurer of the Year for her mountaineering and humanitarian work. She has paved the way for a generation of professional female climbers while balancing motherhood and mountaineering.
Cholatse, a technical 21,130ft/6,446m peak with mixed rock and ice climbing in the heart of the Everest region of Solukhumbu, Nepal, was our “dream mountain.” It is the centerpiece of the award-winning film Dream Mountain.

Dream Mountain won the “Best Mountainfilm” award at the London Mountainfilm Festival and has appeared in seven International Mountainfilm Alliance festivals, including Nepal, Italy, France, Switzerland, the United Kingdom, New Zealand, and Poland. The film has been selected for the Kendall Mountain Tour in the United Kingdom and No Man’s Land across the United States. Dream Mountain has also been chosen for the esteemed Banff Mountainfilm Festival World Tour reaching audiences in 40 countries over the next three years. Beyond the grandeur of the location and achievements, the heartfelt message of the film often moves viewers to tears – share the light of inspiration and encourage others, keep dreaming everyone!